A story of a son who comes to take care of his dying mother in a nudistic community. After her death and a bizarre funeral full of naked people, the son goes through the journey of dealing wth her death and his past. In complete contrast with the topic, the creators used various kinds of fabric to create the visuals which provided softness and a feeling of warmth to the film. Tohether with a sensitive stop motion animation, great camera and sound, this film show how can one talk about a difficult topic with sensitivity and ease thanks to animation. Emma De Swaef and Marc James Roels took care of the direction. 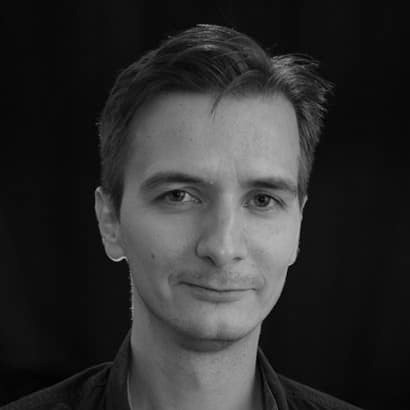 This movie is recommended by Andrej Gregorčok


Andrej Gregorčok is a PhD studies graduate from the Academy of Performing Arts, Animation Department in Bratislava. He debuted in 2007 with his authorial short animated film “Ola Jalallo” which was created as a student’s assignment. Other student’s films followed, “Poznanie” (“Recognition”, 2009) and “Frankenhead” (2011), which had finished on the 3rd place in the category Films under 5 minutes at Azyl Film Festival Bratislava. His film “Lighta” (2012) has been awarded the best animated film at Áčko Festival and gained Special Mention Award at Early Melons student’s film festival.

After finishing his Master’s degree, he worked as a production assistant of short animated films “Fongopolis” (2013) and “Sneh” (“Snow”, 2013). As a techinical supervisor of animation he cooperated on the production of the feature documentary “Felvidék: Horná zem” (“Felvidek: Upper land”, 2014). He has been working in Fool Moon production studio since 2012. He was a production assistant and animator of a successful children’s series “Mimi & Líza” (2012 – 2015) of the director Katarína Kerekesová. He also worked as an animation director, 3D CGI layout artist and animator of the TV series “Websterovci” (“The Websters”), directed also by Katarína Kerekesová (since 2015).

Watch Andrej’s own movies on his vimeo channel.